There’s a Muslim in my house

(Originally written in 2010; update below)

A Muslim is in my house and it makes me so happy. I got an email from my alma mater saying that there was an international student from Turkmenistan that needed a place to stay. I had a place for her, so I quickly Goggled Turkmenistan to see exactly where it is and how well this might fit for our family. After a family conversation that included a vote from each family member, we sent an invitation to Zoe to stay in our home.

Zoe arrived at our home in mid-August, just at the start of Ramadan and all the talk of burning Qurans that comes with 9/11. Before Zoe arrived, it never even occurred to me to consider what kind of religion Zoe belonged to or that she even belonged to a religion. We soon found out that Zoe is a Muslim, although to her pronouncement, “not a good Muslim” since she didn’t fast or pray regularly. Having a Muslim in our house did, however, make the conversation about 9-11, Quran burnings and the ground zero Islamic Center debate much more personal. In fact, having Zoe in our house has been hands down the best education on religion and living our principles that I could have asked for. Ever! Now that we have a Muslim in our house, our whole family has experienced acceptance and encouragement of spiritual growth.

I sometimes fail, but I try to raise my kids to see people as people, and not as their religion. This may stem from my own religious upbringing– the whole time I grew up, I didn’t even know what a Muslim was. For that matter, I didn’t know what a Jew was and I barely even knew what a Methodist was. I was raised Baptist; not any kind of Baptist, but Missionary Baptist. The kind of Baptist that is so Baptist that that any other kind of Christianity is seen as being “modern” and wrong. So Baptist that we didn’t even learn that there were other types of religion besides Christianity.   So I find it very interesting considering where I sit now, with a Muslim in my house.

There is so much I can be doing as a parent to show my child religious tolerance, or better yet, religious acceptance. I can, and do, talk with them about how important it is to be open-minded and open hearted for differences in beliefs. I can talk with them about how important it is that we respect others no matter what our thoughts and traditions are. I teach them about the importance of accepting others for who they are and how they treat others, rather than their ideology. I could go one step farther and listen to my children as they express what’s important to them and explore what qualities are valuable as human beings, neighbors and community members. We could even go and visit other churches, synagogues and mosques, so that they can see and learn from experiences about how other think and live and believe. I don’t do that, and probably won’t. But I could.

This, however, is what I know to be true. There is no more powerful teaching tool than fostering  a deep and meaningful relationship with someone that believes differently.

This is something I did on accident. I would love to say that I asked Zoe into our home to foster religious growth in my children and to help them open their eyes to differences. But like most times when our children really learn from us parents, I stumbled into this moment. Someone needed a room; I had a room to give.

But the beauty is…the result is far more amazing than I could have planned. We are the ones that have been on the receiving end of this situation. We are the ones that now understand a whole new culture; my children can now listen to the stories about far away places and have not only an open heart and mind, but a deep seating connection that they will take with them as they become the next generation of leaders.

Zoe is our Muslim and we love her. In the six weeks that we have had her as a guest in our home, we have discovered that being Muslim isn’t a whole lot different than being Baptist or being Methodist or being Unitarian for that matter. Zoe, like the rest of us, lives her life trying to be the best person she can. She makes us laugh, helps us grow and teaches us daily.

You know what else? Zoe, our Muslim guest, is a peacemaker. My children are consistently greeted by a calm, understanding and patient friend in Zoe (even after eternal moments of begging for one favor or another). Although she has only been here for six weeks, she has shown grace, poise and humor in a way that has made her family. So the Muslim in my house has taught us an important lesson: as we listen to the news and hear of people wanting to burn a Quran and spread hate, we know that being a Muslim isn’t awful. In fact, it is great. I’m glad there’s a Muslim in my house!

Zoe lived with us for two years, and has been a part of family for five years. I have had the absolute honor of calling her a friend and a member of our family. She has given us all the gift of her kindness, compassion, and world views. She has introduced to people from all over the world, many of them Muslim. She is a gift, and in light of the horrible shootings of three Muslim young people in Chapel Hill, I wanted to share a bit of the light my relationship with Zoe has brought. #‪#MuslimLivesMatter‪ 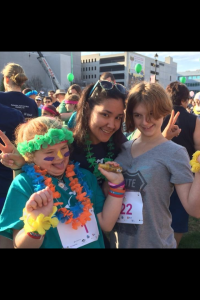 Zoe and my girls running a 5K.